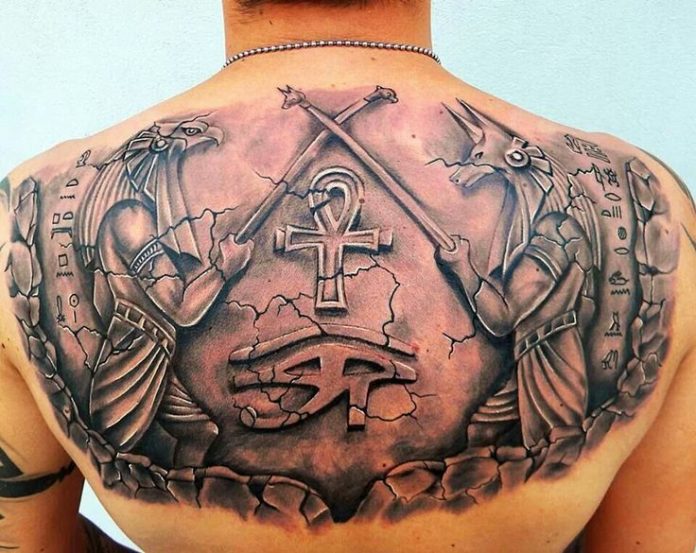 Egypt is a country that has many layers of mysteries. The country has rich historical and cultural background and that is seen in every aspect of Egyptian life. Egyptian tattoos need special mention in this regard as they have the perfect combination of Egyptian symbols and hieroglyphs. People who love Egyptian tattoos like to have beautiful monuments and artifacts, mummies, pyramids, The Sphinx and other items inked on different parts of the body. Usually, Egyptian tattoos are elaborate and colorful and cover quite an area on the body. When done in a proper manner, these tattoos look really cool and awesome.

Check out these awesome Egyptian tattoos:

The Eye of Horus –

This tattoo features a beautiful eye. Known as the Udjat, the tattoo stands for protection and healing. This tattoo mainly looks good on women. Also known as the Eye of Ra, the eye symbolizes prosperity, power, wisdom, and protection. As per mythology, evil god Set destroyed the eye of Horus, who was a good God. The eye was later reconstructed by Thoth.

Hieroglyphs are basically symbols, which are representations of characters used in the Egyptian language. Deciphering the meaning of the symbols in quite difficult, but they look very good and attractive. They are the most common kinds of Egyptian symbol tattoos.

When compared to Hindu Gods, the numbers of Egyptian gods are less, but still, there are many. Ra is considered as the oldest and the most powerful of gods and is the sun god in Egyptian mythology and culture. Tattoo of Ra is very common and popular as well. It is possible to customize the tattoos. The meaning of the tattoo is very deep, complex but colorful.

The Egyptian Sphinx is well known all across the world. Creating a replica of the same in a tattoo is an extremely challenging job. This is the reason, this tattoo is very popular. Sphinx has been carved from a single piece of stone. With a man’s face and body of a lion, the Sphinx is endowed with the duty of protecting the pyramids. Though very tough, once the tattoo is created, it looks very beautiful.

Kings in ancient Egypt were known as Pharaohs. When they were made into mummies, they were gilded and given a common face. Check out Egyptian arts and paintings and you will find Pharaohs to be an integral part of them. Pharaoh masks are quite common. Usually, the tattoo of the Pharaoh is quite large and looks best when done on a big area – doing the tattoo on the back is ideal.

As per Egyptian mythology, Anubis is the god of the dead. Anubis has the head of a jackal and the body of a man. While on one hand, there is a stick, on the other hand, there is the famous Ankh cross. Anubis tattoos are usually made as they are thought to provide protection from death.

There are many other Egyptian tattoos, which are seen to be flaunted by celebrities and stars. They are most elaborate, intricate and colorful.