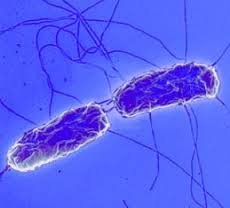 Typhoid fever is a bacterial diseases caused due Salmonella typhi. There were many cases globally during the early 20th century. It was eradicated later on due to improved knowledge about the disease thereby improved sanitation and treatment. It is still persistent in developed countries but with a very fewer cases. It still persists in developing and under developed countries due to lack of awareness, poor hygienic conditions and poor sanitation. Below explained regarding symptoms of Typhoid Fever.

Many strains of typhoid are there, but most causative stain is typhi and followed by paratyphi

Typhoid fever causing bacterium is transmitted to a healthy individual by the ingestion of food and drinking of water which is contaminated with the faces of an infected individual which contains the bacterium Transmission even occurs due to vectors like flies which land on the feces and on food we eat.

The onset of the disease signs are observed from early stages of the infection itself. It pertains till 3-4 weeks, the following are the symptoms shown in the order of their appearance from the day of infection: