Small pox is a viral infection caused due to two variants of virus, Variola major and Variola minor. It is one f the deadly disease which wiped many people during its outbreak. 30% of the persons infected with the virus ended dead. It was also used as biological warfare. Edward Jenner first observed that milk maids developed resistance from small pox, thereafter he started vaccinating by taking the pus from the infected milkmaids with cowpox to healthy individuals. Now small pox is completely eradicated from the world and there are no cases of small pox reported globally. The last reported case was in the year 1977. Small pox virus is still maintained at two labs globally. 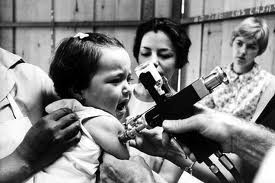