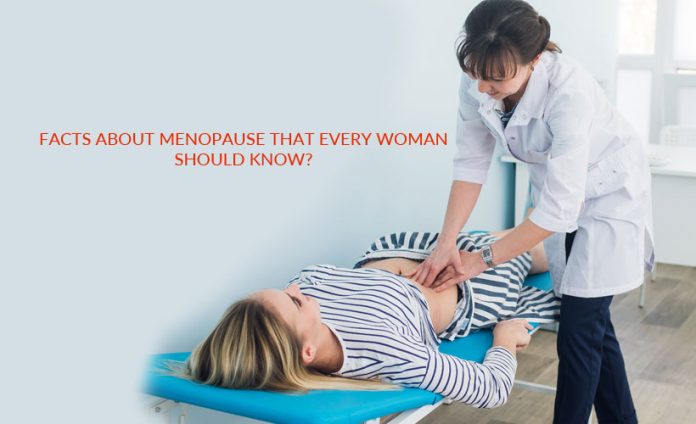 Menopause is referred to a woman’s “change of life”, which begins when her period stops. If one has had n periods for a year then one is considered to have attained menopause.

Menopause occurs when one’s stop producing the hormones estrogen as well as progesterone. This decrease in the production of estrogen and progesterone can indeed bring about several changes in one’s body system.

Menopause is a no doubt a life-changing process, and one must be aware of all facts concerning it. It is better to be prepared for it. Required knowledge will indeed help one to overcome the challenges of menopause and thus lead a healthy as well as happy life.

1. The age that Menopause Occurs

The average age that American women do reach menopause is 52, but it can also occur anytime between the ages of 45 and 58.

Most women have their last period sometime between the ages of 45 and 55.

Usually, the age of menopause is considered to be genetically determined and factors such as smoking or chemotherapy can indeed accelerate a decline in the functioning of the ovaries, and thus resulting in earlier menopause.

The average of menopause in the U.S. is 52, some women may reach it early. Based on experts viewpoint it is accepted that menopause occurs before the age of 40 and is referred to as early menopause.

Other Factors that cause Early Menopause

3. Perimenopause is Not Menopause

One must not confuse perimenopause with menopause. They are in fact two different health issues:

Menopause indeed does affect a woman in many ways and some are able to cope up with it whereas others undergo depression during that time.