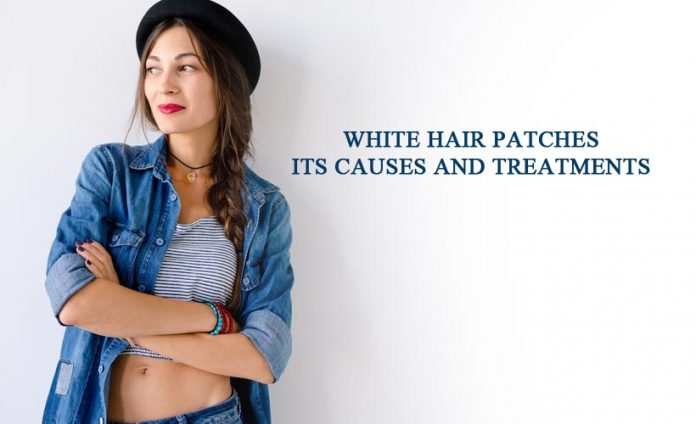 It can be quite distressful to see a white patch in one’s hair and can be embarrassing too! The question that arises in one’s mind is how to deal with it?

A white hair patch on one’s head is a hair disorder, which is medically referred to as poliosis. It can be noticed in both male and female of any age and there can be several causes of this health issue. The patch does look weird and affects one’s self-esteem.

What Is Poliosis Or White Hair Patch?

Poliosis is indeed a small ‘localized patch’ of white hair (forelock or rather a streak at the front of one’s hairline) that does develop into the regular hair. In this health condition, the melanin pigment present in the hair follicles of that area tends to decrease quite a lot which rather results in the discoloration of the strands. Depending upon the underlying causes of this de-pigmentation, poliosis can also be both short-term as well as long-term. It can be noticed in people of all ages, irrespective of the gender. Though it is mainly seen on the head, the patches can develop elsewhere as well.

Poliosis or rather these white patches of hair on the head can be divided into the following two categories:

1. Genetic / Congenital: At times these patches can be genetic in nature. They can be noticed at the time of birth of a baby on account of mutation of certain genes or other genetic issues.

2. Acquired: If not congenital, poliosis is also considered as acquired. It can be the side or after effect of certain medical conditions that do become visible in the later parts of one’s life.

What Are The Causes Behind It?

There is a wide variety of causes that are lying behind the formation of such white hair patches on the head. They are as follows:

How Is The Condition Diagnosed?

Since such hair disorder is not associated with a single medical condition, it is essential to go in for a thorough checkup in order to get a proper diagnosis. Initially, the healthcare professional would indeed go through the detailed medical history as well as the family record of the patient. After that, the following assessments would be rather be carried out:

Is There Any Effective Treatment?

Proper treatment of poliosis is needed to be discovered, especially if it is congenital. No doubt, there are several preventive methods that can be followed to avoid such conditions in one’s later phase of life. These include:

If the tuft of white hair bothers one too much, one has to simply dye it regularly. One can also opt for a hairstyle that will indeed help one hide that weird part of one’s hair. And the salt and pepper look can indeed give a certain character to one’s appearance.