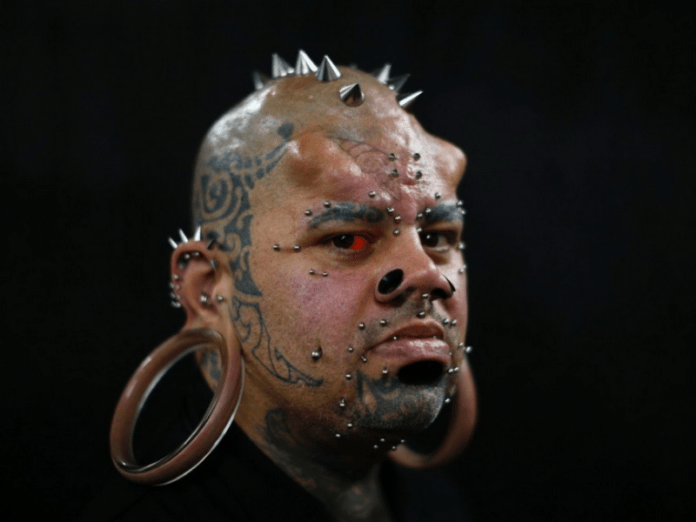 Most tattooed man Guinness world records have attained such distinction on account of his amazing tattoos. It is interesting to observe the most tattooed person.

Tattooing is in-thing and cool to do so. Several people adorn their bodies with them. Some of them have been acclaimed as most tattooed man Guinness world records.

Kala is known to have only 25% of the clear skin on his body. Tattoos cover 75% of his body His ears, tongue, etc look different. He placed metal horns to his head, expanded holes in his earlobes, and got a forked tongue.

She was born in 1937 in Yorkshire, the UK and her body is 93% covered by ink except for the face, soles of her feet, as well as some parts of her hands.

3. Horace Ridler (The Great Omi or the Zebra Man)

Horace Ridler is indeed an amazing person and his lifestyle has been very impressive. His whole body is painted in bold black zebra type of stripes.

Julia was born with a terrible skin disease known as porphyria syndrome. It was, for this reason, she wanted to hide its traces on her body with the help of color tattoos. After about a decade, she was recognized as being the most tattooed woman in the world. It is interesting to note that her body had 95% drawings on it.

Eric Sprague, known as The Lizard Man was born in 1972 in Fort Campbell, KY. Almost his entire body is covered with green tattoos. He was the first man to in fact sharpen his teeth to look like those of his beloved animal – the lizard. He surgically transformed himself and had his tongue bifurcated. His nails were strengthened and stylized as claws. His lips happen to be ink-green in color. What is lacking is the tail.

Rick Genest was born on August 7, 1985, in Saratoga, Quebec, Canada. And has his first tattoo done at the age of 16. He grew up in a simple working family and was the eldest child. As a teenager, he had a very serious operation to remove a brain tumor. After graduating from his school, Rick quit home, and during the next six years, he had tattoos done on his face and body.

He can be acknowledged as being one of the most tattooed people in the world.

Sixty-seven-year-old Tom Leopard spent his life on the island of Skye. He did accomplish to get 99 % of his body covered with tattoos of a leopard skin plan.

Paul Lawrence’s as The Enigma began his foray in tattoos in 1992, under the tattoo needle of ‘Katzen The Tiger Lady. He was in due course of time inked by more than 200 distinct specialists and has had several tattoos done on his body. 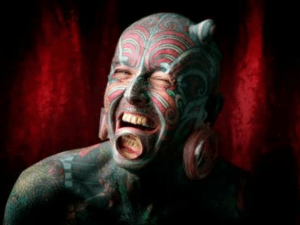 He has painted himself in all parts of the body even his gums as well as ears with ink. His actual name is Gregory Paul McLaren and was born in 1971.

Most of these men do have the distinction of being the most tattooed man in Guinness world records.