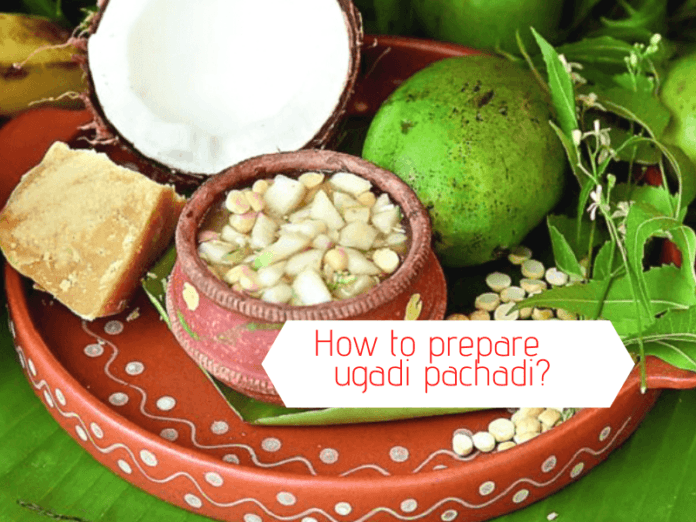 1. Peel and chop the green mango.

Make use of a vegetable peeler or small knife in order to remove the peel from a small mango. Then use a knife to remove the large seed and dice the mango into 1⁄4 to 1⁄2 inch (0.64 to 1.27 cm) pieces. Set the diced mango aside.
The raw mango has a taste that really makes one feel to have more of the Ugadi pachadi. For an even bigger surprise, leave the peel on the mango when you dice it.

Put 1/4 cup (60 g) of tamarind paste into a bowl and pour in 1⁄2 cup (120 ml) of water. Use the fingers or a spoon in order to mix the tamarind until it does get dissolved and is then prepared as a cloudy liquid.

The sweet-sour flavor of tamarind can rather be offish but yet it is relished. Ugadi 2020 will definitely usher in this tasty liquid although it is sour and sweet.

4. Stir in the jaggery until it gets dissolved.

Add 1 tablespoon (8 g) of grated jaggery to the tamarind juice in the bowl and then stir gently until it gets completely dissolved.
The sweetness of jaggery represents happiness.

5. Mix in the mango, neem flowers, salt, and pepper.

Stir in about 1 tablespoon (10 g) of the diced mango (or more according to one’s preference), 1 tablespoon (14 g) of neem flower buds, 1/4 teaspoon (0.5 g) of ground pepper, and 1/2 teaspoon (2.5 g) of salt. Serve the Ugadi pachadi as part of your Ugadi celebrations.
It is better to use the Ugadi pachadi soon after mixing it since it does not store well. In South India, In Andhra Pradesh and Telangana, Ugadi is celebrated by the Hindus and is a festival that ushers in the new year of promise and hope. At this festival the Ugadi pachadi is served as it is sweet and sour, thus indicating the good and difficult moments in life.