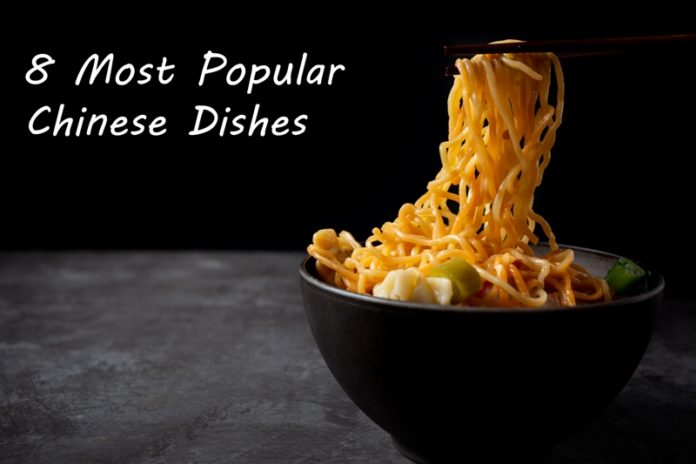 Chinese dishes are tasty and famous all over the world. It is popular for its aroma and spicy taste. It is prepared in different forms in different regions of China.
China has indeed the most popular culinary heritage in the world. The history of this tasty cuisine dates back to about 1000 years with varied cooking styles, techniques as well as ingredients that have evolved over some time.
The taste of Chinese dishes, Chinese food is exotic.
A typical Chinese meal consists of carbohydrate or starch such as noodles, rice or buns, and accompanying stir-fries or dishes of veggies, fish as well as meat. They do make use of a lot of fresh vegetables such as mushroom, water chestnuts, bamboo, and even tofu. In North China, wheat-based accompaniments such as noodles and steamed buns are quite popular whereas in South China it is rice.

A balance is maintained between appearance, aroma, and taste. Much attention is given to the aesthetic appearance of the food with diversified colors. Sauces and seasonings such as fish sauce, five-spice powder, oyster sauce, soy sauce, vinegar, root garlic, fresh ginger, and others are used generously to offer a complex play of flavor as well as the aroma.

Quite similar to Japanese cuisine, Chinese dishes are rich in umami. The umami taste is common to several dishes such as Chinese cabbage, spinach, celery, green tea or fermented products such as soy sauce and pastes. Chinese dishes, Chinese food is very tasty indeed.

Chinese food and its preparation are influenced by the two major philosophies – Confucianism and Taoism. One of the standards set by Confucius believed that food must be cut into small bite-size pieces before being served. Those who follow Taoism do focus more on food that promotes health and longevity and those that have healing power

Chinese cuisine is very diverse. Cooking styles, ingredients, flavors – all do vary from region to region. The most prominent regional cuisines in China are Anhui, Cantonese, Fujian, Hunan, Jiangsu, Shandong, Szechuan, and Zhejiang. Chinese dishes, Chinese food is famous all over the world.

Cantonese cuisine is famous all over the world for its rather distinctive style. Most dishes are of course steamed and stir-frying which does make it healthy and non-greasy. The dishes are tender, slightly sweet and with a mellow fragrance.

Shandong cuisine originated in East China and mostly features seafood as it is a coastal province. A person will find scallops, prawns, clams, sea cucumbers and just about everything on the menu. They heavily rely on salty flavors.

Zhejiang cuisine does also thrive on seafood but focuses more on soft, fresh flavors. Their food is known to have a delicate appearance. They are also fond of making use of bamboo shoots. This province is known as the ‘land of milk and honey’.

Jiangsu region is known for its soft texture. Back in the day, it was a very prominent part of ancient China’s royal cuisine. Their dishes do offer a balance of sweet and salty tastes.

Szechuan cuisine stands out due to the bold, pungent and spicy flavors. The use of Sichuan peppercorn is what makes it unique. This one is for those of you who love the sting.

Anhui cuisine does make use of a wide variety of herbs and vegetables, especially, fresh bamboo and mushrooms. It also uses a lot of wild herbs to enhance the flavor as well as the aroma.

Fujian cuisine is quite often served in a broth or soup making use of cooking styles such as braising, stewing, steaming and boiling. The most notable features of this cuisine are indeed the use of fresh ingredients from the mountains as well as sea, soup making and a lot of focus on seasonings.

Hunan cuisine is popular for its hot spicy flavor, fresh aroma, and deep color. This province is also famous as the ‘land of fish and rice’. It is known for its stews and braised and baked dishes.

Also read: Eating any of these three healthy Indian dishes