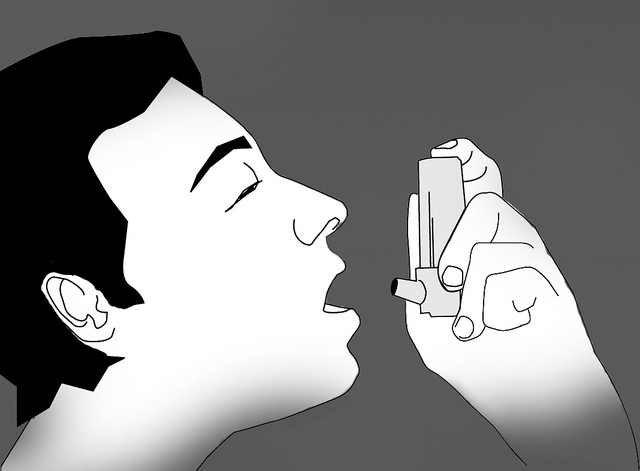 10 asthma symptoms you should know

Asthma is the condition where a person finds it difficult to breathe because their airways swell up, making it hard for them to breathe. This reaction occurs when the persons airway comes into the contact with an allergen, which in turn triggers and causes it to swell up. Asthma can be divided into 2 categories depending on type of trigger – extrinsic which is caused by external allergen like pollen, animal dander, dust and intrinsic which is inhalation of cigarette smoke, paint vapour . In some cases it might also be worsened by the chest infection, stress, laughter, etc. Apart from that, some drugs like aspirin and other NSAIDs are also known to cause the asthma attacks as well.

10 asthma symptoms you should know

Most people who are suffering from asthma have attacks separated by the symptom-free periods. A person may suffer from symptoms of this condition for anywhere between the few days to a few months. The common symptoms of asthma include:

Cough with or without sputum (phlegm) production:

Continuous cough particularly at night, is a common sign of lung disease such as asthma. When it comes to the children, if your child coughs a lot and vomits during a short period of coughing, it is time you took him/her to doctor as it could be a sign of asthma.

As your airways become more and more inflamed they tend to get filled with the mucous. Apart from that, due to constant coughing the muscles of your chest tend to contract making you experience tightness in chest. A common explanation of the symptom is that you may feel a kind of pulling in of skin between the ribs which is due to the lungs inability to take in air.

This symptom is due to inflammation which irritates the muscles around the airways and narrows it down. So, it becomes difficult for air to get in and out of lungs, therefore you feel breathless.

When you can hear a screeching or hissing sound as breathing, it is called out of breath. This is very commonly observed in asthmatic patients.

This is otherwise known as adult onset asthma where symptoms are active in their childhood, disappear or collapse as one grows up. But they tend to reappear after the long period during adulthood. The reasons for such onset might be smoking, cold and cough, heavy exercise, certain medications without doctor’s consultation etc.

Episodic attacks with symptom-free periods in between:

This symptom is commonly observed among children nearly 20% approx. The attacks usually occur 6 to 8 times in year but the symptoms are visible at least once in the month. A preventative therapy by using corticosteroids has found to be effectual in such condition.

Worse at night or early in the morning:

The exact reason of worsening situation at night is unknown but some doctors believe that all allergens are more exposed to body in lying position, making a person more suseptable to an asthma attack. Also hormonal activity is usually higher during this time.

Hot and humid weather or extremely cold weather causes and outbreak of the asthma symptoms. However you cannot control the weather, as an asthmatic you should make sure that you do not expose yourself to varying temperatures.

Gets worse with exercise and heartburn:

Exercise-induced asthma is triggered by energetic or prolonged exercise or physical effort. In such patients, within 5 to 20 minutes of exercise, narrowing of airway begins, thus making it difficult to catch one’s breath. In healthy individuals, the air inhaled, is first warmed and moistened by nasal passages. But during an exercise people tend to breathe through their mouths thus inhaling colder and drier air. In exercise-induced asthma, the muscles surrounding airways are sensitive to these changes in temperature and dampness. Hence the airways respond by contracting their pathway, leading to asthmatic symptoms.

But there are also some adverse symptoms in the asthmatic patients. And whenever they occur, the patient should be rushed to doctor without further delay. These include, bluish discolouration of lips and face, severe drowsiness or confusion, speedy pulse, harsh anxiety due to shortness of breath, sweating or other symptoms that might occur due to abnormal breathing pattern, difficult breathing and chest pain.

Al Though there is no specific cure for this disease, but a proper diagnosis and thereafter continuous preventive therapy or control drugs under a qualified practitioner can help an affected person stay away from recurring attacks. As an alternative therapy, homeopathy and ayurveda also provide effectual remedies.