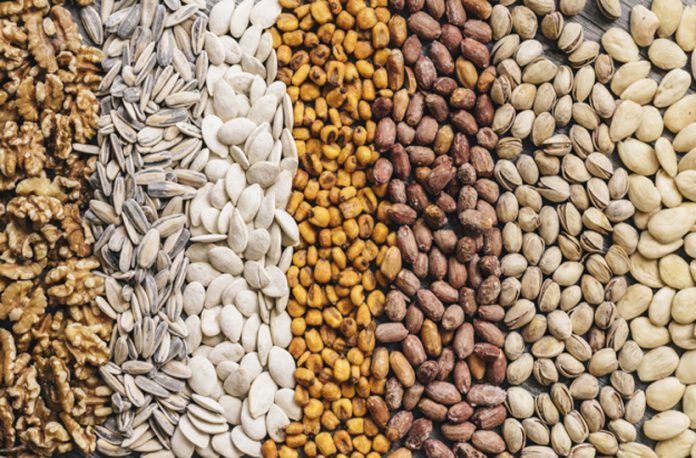 This is found in the common pea (Pisum sativum). On carefully opening up a mature green pod along the dorsal suture the placental tissue is indeed seen to spread along the ventral suture and the roundish seeds are rather seen arranged in two rows along the length of the pod.

Each seed is actually attached to the placental tissue on the fruit suture by a stalk called the funicle. The funicle is indeed narrow at the placental end but widens into a disc where it joins the seed. When the mature seed is detached the seed coat is the micropyle.

If the seed is rather soaked, wiped and then squeezed, water is actually seen to ooze out of this micropyle. The seed is rather covered by the tough broad end of the funicle thus leaving a scar on the seed referred to as the hilum. Next to the hilum is a pinhole opening on the seed coat of a light color. This tough seedcoat is known as the testa.

The tegmen, which is rather delicate and completely adherent to the inner side of the testa, is not distinguishable in the mature seed. On opening the seedcoat the kernel is obtained. The kernel in dicotyledonous exal­buminous seeds happens to be the embryo. In it, the two fleshy cotyledons are very conspicuous.

These are fleshy as all the nutrients required by the growing seedling in the first few days are kept stored here.

The two cotyledons are hinged to an axis (flagellum) so that they do open out like a book. The flagellum represents the axis of the future plant. One end of the flagellum is pointed and protrudes out of the cotyledons.

This does lie next to the micropyle and is the radicle or the rudimentary root. The protruding radical does lie under the pouch-like expansion of the seed coat and is thus visible even when the seed coat is not removed.

The portion of the flagellum happens to be below the cotyledonary node (i.e., between radicle and node) is referred to as the hypocotyl and the portion just above (i.e., between node and plumule) the node is the epicotyl.

There is no doubt various types of bean seeds of which Dolichos lablab is very common. The seeds occur in the pod as in peas. They are larger and more or less oval. The seed coat (main testa with a thin fused tegmen) is indeed very hard and black, brown or red in color. The funicle is extended into a long rape which is seen above the hilum. The embryo is as usual.

There are quite a few other dicotyledonous exalbuminous seeds that we commonly come across. The tamarind (Tamarindus indica) seed is rectangular and also covered by a very hard shell-like seedcoat.

The hard covering on the seed of mango (Mangifera indica) is actually the innermost layer of the fruit (endocarp) which is not a part of the seed. Inside, the two very large cotyledons are rather covered by a papery seed coat. In jack-fruit (Artocarpus heterophyllus ) the two cotyledons arc of irregular and unequal size. The seed coat does show both testa and tegmen. The cotyledons contain latex and, of course, lot of starch.

They do show vein markings although white. The sunflower (Helianthus annuus) seed is actually its fruit enclosing a single seed. The hard covering is the fruit-wall or rather the pericarp.

Inside, the oily embryo is actually found covered by a brownish membranous seedcoat. Mustard, groundnut (peanut), sesame and flax (linseed) seeds contain a lot of oil in the cotyle­dons.

In orange and lemon, the seed is sometimes polyembryonic, i.e., it does contain more than one embryo. The oak acorn is a fruit. The testa of the pomegranate (Punica granatum) is juicy and forms the edible part.

In this type of seeds (ground plan) the food is not really stored in the two cotyle­dons of the embryo but in the endosperm external to the embryo. It will be actually seen later that all embryos who get their food from the endosperm which in its turn gets its food from the nucellus of the ovule.

A very common example is the castor bean (Ricinus communis) where the fruit is not a bean but a three-chambered capsule. Here, the seedcoat happens to be a hard shell of a mottled black or brown color. The hilum is indeed almost hidden by an outgrowth, the caruncle. The caruncle is spongy and also absorbs water readily so that it may be of some use in ger­mination. There happens to be a distinct raphe running longitudinally down the seed from the hilum.

On breaking open the shell a white mass is rather found covered by a papery white membrane. This membrane is sometimes supposed to be the tegmen but has been found not to be a part of the seed coat.

The two cotyledons are hinged to the flagellum which does show the protruding radicle with a short hypocotyl behind it and the plumule hidden between the cotyledons.

Most of the common monocotyledonous seeds are indeed albuminous. The large endosperm of the cereals is indeed the most important source of starch, the principal food of all people.

Rice (paddy), wheat and maize can be considered to belong to this class of seeds. They are in fact the most important cereal crops in the world. In all these, the- grains are actually fruits of the caryopsis type. The rice grain is rather tightly covered by the husks; in wheat, the husks are loose, while in maize the husks are short and loose so that the grains are ex­posed. In all the three, the outer coating of the grain is rather formed by the fusion of the peri­carp and the seed coat.

Maize (Zea mays) has the largest embryo and is the easiest to examine and dissect. Maize grains are rather flattened and more or less oblong. On the flat face, the embryo can actually be seen even from the outside as a whitish deltoid area. The wall (pericarp + seedcoat) is yellowish in color or red and so firmly adherent that it cannot be separated from the kernel. In case the seed is cut longitudinally into two and the, cut face stained with iodine, the endosperm part (deep blue because of starch) and the embryo part (yellowish) can be easily demarcated.

The wheat grain (Triticum ) does resemble maize. The grain is oval and there is a longitudinal groove along the ventral side. The wall is light brown (‘wheat color’).

The endosperm does contain a decreasing proportion of gluten (a protein) as it approaches the scutellum giving it a more and more mealy white appearance.

The embryo resembles maize but from the middle part of the axis, opposite the scutellum, a tongue-like outgrowth, called the epiblast, is seen. The epiblast is also found in many other Gramineae.

The rice grain (Oryza sativa) shows a brown or red-brown wall (pericarp + seedcoat). A lot of protein is contained in the aleurone layer which, along with the pericarp and seedcoat, gets rubbed off in course of polishing rice. The embryo also gets broken.

Although all the common monocotyledonous seeds are albu­minous there are indeed a few of the exalbuminous type. This type of seed is rather found in the Aroideae (e.g., Pathos and Amorphophallus cam- panulatus) and also widely in the family’s Hydrocharitaceae (e.g., Vallisneria), Alismaceae (e.g., Alisma Plantago), Naiadaceae, etc.

The seed of Alisma does show a curved embryo with a radicle and a cotyledon.