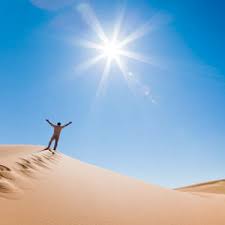 Heat stroke is a condition in which the body temperature goes beyond 105 degree Fahrenheit. It can strike when exposed to higher temperature along with dehydration and failure of body cooling system. It severely affects nervous system causing various symptoms like seizures, nausea and vomiting. Heat stroke can cause a severe damage and even death too. Even if the person survives heat stroke there is a lot of chance of him having neurological disorders in his lifetime. Old people and athletes who do a tremendous physical activity outdoor for long hours and do not take sufficient fluids are more prone to heat strokes.

With alarming rates of global warming heat strokes will increase accordingly and it is very important to act up on it since it can be prevented.

The hallmark symptom of heat stroke is a core body temperature above 105 degrees Fahrenheit. But fainting is the first sign.

Other symptoms include the following:

Heat stroke can be easily avoided by having enough amounts of fluids like water, and other fruits juices.

Try to avoid extreme hot conditions, if have to go to hot temperatures precautions should be made before in hand.

Treatment includes rapid cooling of physical body. Taking a cool shower bath to cool down the body. It’s always advised to go to emergency as soon as possible before permanent damage occurs.