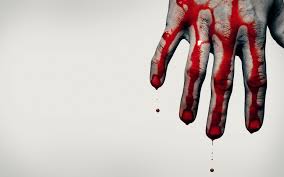 Haemophilia is a genetic disorder, it is characterised by absence of clotting of blood and continuous bleeding. It is a dangerous and life threatening problem. It occurs mostly in males and very rare in females. Read about inherited bleeding disorder.

Haemophilia is a X linked recessive gene therefore males are more likely to suffer from haemophilia than females due to the presence of one single X chromosome whereas females carry 2 X chromosomes. Therefore females act as carriers who pass the defective gene to the next generation.

Queen Victoria was a carrier and passed the mutation to her son Leopold and through several of her daughters to members of the royal families of Spain, Russia, and Germany.

There are three types of haemophilia 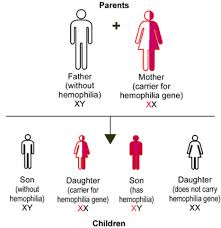 The blood clotting mechanism is a series of cascade reactions which involves many clotting factors that generate fibrin which together with platelets stops bleeding and forms a mesh near the bleeding area. If any one of the clotting factors is deficient it leads to haemophilia.

The symptoms of haemophilia can be mild to severe, depending on the level of clotting factors you have. Most cases are mild, but people with severe haemophilia experience symptoms, which require ongoing care. 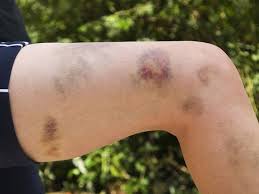 Some of the signs of haemophilia are, large bruises, bleeding into muscles and joints, spontaneous bleeding, and bleeding for a long time after a cut or surgery.

People with severe haemophilia often experience internal bleeding. This usually occurs around the joints and muscles, causing pain and stiffness. It can also lead to joint damage over time.

Although there’s no cure for haemophilia, treatment usually allows a person with the condition to enjoy a good quality of life.

In recent decades, genetically engineered clotting factor medications have been developed to prevent and treat prolonged bleeding. These medications are given as an injection, the timing of which depends on how severe the condition is. Injections are usually only given in milder cases in response to prolonged bleeding, whereas more severe cases are treated with regular injections to prevent bleeding.