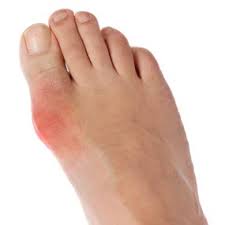 Gout- A form of arthritis caused due to uric acid crystallization in joints. It is mostly formed in the big toe of the feet. It enlarges in size, becomes red and swollen and causes severe pain. Uric acid is formed from various metabolisms like break down of purines etc. Thus uric acid formed like this dissolves in blood and is removed by dialysis in kidneys, thus passing in the urine. When the uric acid levels increase in the blood due to many reasons like improper function of kidney, excess amount of uric acid formation due to high purine diet can cause them to crystallize and cause gout

Gout often appears on the big toe but can happen in knees, foot, ankle and other joints too. The pain of the gout occurs without any notification and usually occurs during night. The pain is severe and sustains for longer periods, it causes severe discomfort and the person will not be able to move the joint freely, it will become stiff.

Gout can be acute recurring time to time even after treatment. Other complications include

The following people are more prone to gout

Acute gout can be prevented by trying to reduce the pain and amount of uric acid, by using drugs like non steroidal anti-inflammatory drugs, colchicine, and steroids. Ice can be used on the swollen part for 20-30minutes to remove the pain.

Future gout attacks can be prevented through a combination of lifestyle changes, such as losing weight if you are overweight, and taking a medication such as allopurinol, which lowers uric acid levels.

Relieve the Symptoms of Depression with Yoga