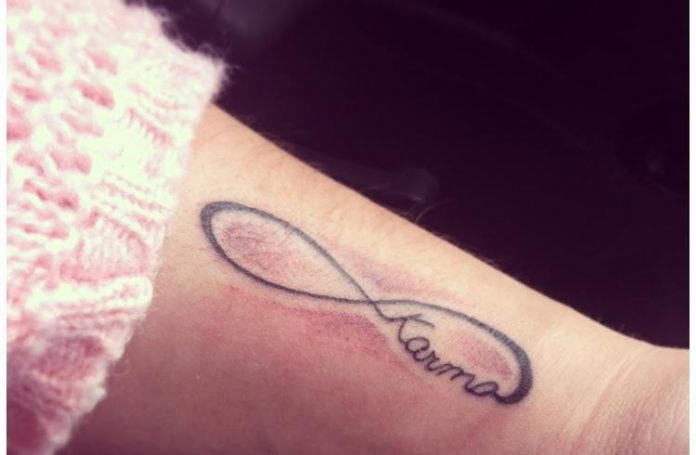 Getting a tattoo done is gaining popularity among the celebrities and the common folks alike. Among the various kinds of tattoos that people get, the “Infinity tattoos” are quite popular and their popularity has seen a steady increase in the last few years. People are opting for these tattoos in some or the other form and these have become a hot favourite among the couples too. What exactly is an Infinity tattoo? Well, if you are not aware of it, then read on to know more. Read about Best Infinity Tattoo Fir Men and Women For You!

We cannot talk about a symbol without knowing, learning more about it from the books of history. The symbol used for infinity is also similar to the Ouroboros, which is a mythological creature that is in the form of a snake that has eaten its own tail and has thus become the only creature that has no end. The infinity symbol uses endless loops or circles that also relate to the seasonal cycles, as they are repeated every year. The infinity tattoos are quite simple and people can also customize these in a number of ways. The most popular of all the choices are the inclusion of a word or a sentence that is engraved inside of the loop. The common words that are used are love, friendship or life. These are also used to signify a strong relation that does not have an end and couples love to match their infinity tattoos.

One can even add some additional symbols like stars or arrows or hearts that add an extra flair to the existing design. One can also add a religious touch to the tattoo by adding a cross or an Om symbol between the loops or the looping lines. Such tattoos are used to reflect a person’s never-ending faith.

The tattoos created from the infinity symbol bear great meanings and the wearer can choose and customize one based on his/her personality and faith. As mentioned earlier, these designs do not have any limitations and signify endless possibilities. The simple design of the tattoo itself shows that there aren’t any boundaries. The wearer can think about the moments of life lived with decisions that have infinite endings.

The symbol of infinity is in itself a representation of the universe and the possibilities it provides for each one of us. This is what makes this tattoo so special that it holds a special meaning, irrespective of where you are from.

The infinity tattoo design is ideal for one and all and for those who believe in philosophies. If you are an individual or a couple waiting to get bonded in eternal love, the infinity tattoo is the best option that you certainly need to look into.