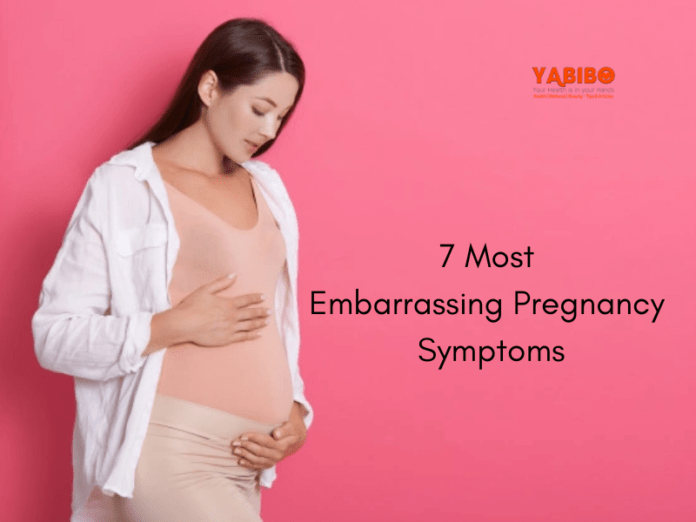 Symptoms of pregnancy are manifold such as vaginal itching, a sign of pregnancy. Pregnant women often get distressed due to these symptoms.

Pregnancy, also known as gestation, is the time during which one or more offspring develops inside a woman. Multiple pregnancies involve more than one offspring, such as twins. Pregnancy usually occurs through sexual intercourse, but can also occur through assisted reproductive technology procedures. A pregnancy may end in a live birth, a spontaneous miscarriage, an induced abortion, or a stillbirth. Childbirth typically occurs around 40 weeks from the start of the last menstrual period (LMP).

Pregnancy changes one’s life as well as one’s body. There are embarrassing moments of pregnancy as these symptoms of pregnancy do emerge.

Almost every pregnant woman does get gassy. It is due to pregnancy bringing in a hormonal surge that can slow down one’s gastrointestinal tract. Symptoms of pregnancy such as excess gas can be distressful.

The normal control over muscles during pregnancy is not there.

Though the problem cannot be got rid of it is possible to reduce the tendency toward gassiness with exercise and changes to one’s diet.

Certain food items such as broccoli, cauliflower dried fruits, and carbonated drinks need to be avoided.

Dairy products can indeed also cause GI distress during pregnancy, thus causing flatulence. Trying out lactose-free milk or other calcium-rich foods in case of being if a person is lactose-intolerant does help.

Pregnant women at times do sneeze and accidentally empty their bladders while standing among friends or even perhaps co-workers. Most pregnant women who tend to experience stress incontinence involuntarily tend to leak urine on account of a jarring cough, sneeze or laugh, only losing a few drops although this also could be very embarrassing.

Several doctors recommend that women do wear panty liners in order to catch the leaks during the last few months of pregnancy when stress incontinence is rather high. Regular trips to the bathroom can also help.

As the baby tends to grow and the uterus enlarges, the baby does end up sitting right on top of the bladder. 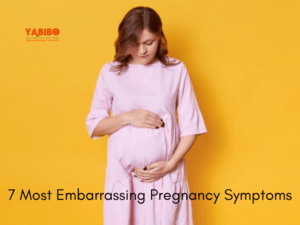 During pregnancy, hormones cause hair growth in unwanted places, and this can be embarrassing as well. Hair can grow on breasts, abdomen, as well as face.

Waxing or tweezing happens to be a safe method for hair removal during pregnancy.

Some women tend to develop a stronger sense of smell during pregnancy. Several people have an aversion to strong food odors, such as poultry or seafood. A smaller percentage of women tend to start picking up on their own respective scent, which can rather be embarrassing.

There are times the person can smell vaginally, especially toward the termination time of pregnancy. Informing the doctor about any new noticeable vaginal odors does help. Vaginal itching a sign of pregnancy can also embarrass the pregnant woman as well as the smell of the fluid discharge.

Hemorrhoids occur and usually occur due to constipation and the straining that does ensure in an attempt to have a bowel movement. Constipation is a common problem in pregnancy. Reducing the risk of developing hemorrhoids by avoiding constipation does help. Staying well-hydrated, eating more fiber, and using over-the-counter stool softeners.

Pimples and unsightly outbreaks do occur often, especially so during the first trimester. Medications are available and soft washes.

Weight gain and other physical changes can make a pregnant woman feel unattractive around her partner. This can at times lead to communication and intimacy problems.

Thus pregnancy has its own problems and pregnant women do face certain embarrassment as passing gas or over-weight complex and so forth.