Gwyneth is an academy award-winning actress and the author of four New York Times–bestselling cookbooks. She is also the founder and CEO of the lifestyle company Goop.

As a household name for over 20 years, there are much known facts about Gwyneth Paltrow, particularly after being Brad Pitt’s gorgeous girlfriend in the ‘90s. Since then, she has no doubt led a successful career on her own, even winning an Oscar in 1999 for her performance in Shakespeare in Love. She does not do much acting these days and focuses on her lifestyle brand, Goop.

Gwyneth Kate Paltrow was indeed born in Los Angeles, California on September 27, 1972, to Tony Award-winning actress Blythe Danner and of course television producer Bruce Paltrow. She has a younger sibling, a brother named Jake, who is a director as well as a screenwriter. She was brought up in Santa Monica, California, where she attended Crossroads School. When she was 11 years old, her family moved on to New York City, settling on the Upper East Side. There, she went to Spence School, a private girl’s school.

blonde beauty spent a lot of her summertime growing up at Williamstown Massachusetts where she would spend time watching her mother perform at the Williamstown Theatre Festival.

As a teen, The Talented Mr. Ripley actress indeed had a rebellious streak. She would sneak out with her friends to hit the clubs. 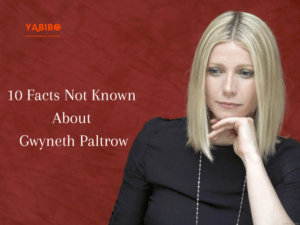 The Shakespeare in Love star did spend the summer of her sophomore year in her high school as an exchange student in Talavera de la Reina, Spain, and learned to speak Spanish fluently. “When I was 15, I went to a small town outside Talavera de la Reina and I had the most wonderful experience. It changed my life. Spain became a second home,” she said.

5. Dropping Out of University

She pursued Anthropology at the University of California, Santa Barbara, for a year before dropping out to pursue a career in acting.

6. On a Deserted Island

In 1997, the Oscar-winning actress happen to spend three days alone on a deserted Caribbean island. She wrote about her experience for Marie Claire magazine. She brought a tarp, a knife, a hammock, a flashlight, bottled water, a pound of rice, matches, as well as a camera to record the experience and also built a little shack, cooked up some rice, swam, and wandered around mostly nude. She had nothing much to do except think and write about her seclusion.

7. Losing the Love of Her Life

She lost her father who died of complications of oral cancer and pneumonia in 2002 while he was vacationing with her in Rome, Italy on her 30th birthday. As her father was struggling with cancer, she learned a lot about healthy eating. Like most men of his generation, he smoked and drank vodka every day after work and did not pay attention to diet, so she had taken it upon herself to try and cure him with a healthy diet, but he did not accept the diet intake. changed the way that I lived – it changed my whole lifestyle,” she told People. “I completely changed my die

The Proof actress has dated plenty of famous men, including Brad Pitt (with who she was engaged), Ben Affleck, Luke Wilson, and Bryan Adams. She got married to Coldplay’s lead singer, Chris Martin, from 2003 until 2014, and had two children. She is dating Glee­ co-creator, Ben Falchuk.

After her movie Duets, several music producers, including Babyface, did approach her about recording contracts, but she declined their offers. She, however, continued to sing.

After having her second child, Moses, The Royal Tenenbaums actress did struggle with postpartum depression.

Also Read, 10 Interesting Facts About Sai Pallavi One Does Not Know!